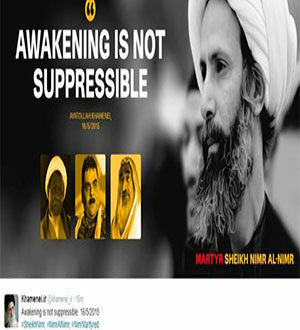 The text, which was part of a speech delivered by the Leader on May 16, 2015, was inscribed next to a photo of Sheikh Nimr and above portraits of Sheikh Ahmed Yassin, the former leader of the Palestinian resistance movement Hamas who was killed in an Israeli air strike in 2004; former high-ranking Hezbollah member Samir Qantar, who was killed during an Israeli raid in December, 2015; and prominent Nigerian Shia cleric Sheikh Ibrahim al-Zakzaky, who was recently detained in a raid by army forces.
On Saturday, the Saudi Interior Ministry announced that Sheikh Nimr along with 46 others, who were convicted of being involved in “terrorism” and adopting a “Takfiri” ideology, had been put to death.
Sheikh Nimr, a critic of the Riyadh regime, was arrested in 2012 in the Qatif region of Shia-dominated Eastern Province, which was the scene of peaceful anti-regime demonstrations at the time.
He was charged with instigating unrest and undermining the kingdom’s security, making anti-government speeches and defending political prisoners. He had rejected all the charges as baseless.
Meanwhile, Ayatollah Khamenei’s official English website, english.khamenei.ir, carried a large image of Sheikh Nimr with the words “What the Quran promised.”