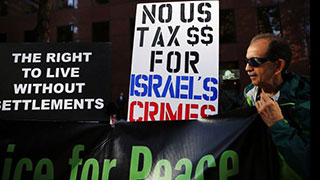 Protesters in New York City condemn US support of Israel

A group of pro-Palestinian protesters have gathered outside the offices of two US senators in New York City to condemn their support for Israel’s continued aggression against the Palestinians.
About 50 members of a coalition of more than 20 organizations on Monday participated in the rally in front of the offices of Senators Kirsten Gillibrand and Charles Schumer.
“Senator Schumer has repeatedly supported Israeli government aggression against the Palestinian people, including the latest assault on the Palestinians of Gaza,” said Candace Graff from Jewish Voices for Peace-NY.

“And both Senators have failed to seek enforcement of laws requiring US funding to be cut off to units of a country’s armed forces that have committed a ‘gross violation of human rights.’”
Brandon Davis, a member of Jewish Voices for Peace, said Senator Schumer has been egregious in standing up for Israel.
“He calls himself the ‘guardian’ of Israel and I think that is a ridiculous foreign policy for a senator of the United States. He’s the ‘guardian’ of New York State and the United States, not Israel.”
The demonstrators also called on the lawmakers to end support of the Israeli military based on a humanitarian law called Leahy Law.
The Leahy Law forbids the United States from aiding foreign militaries that commit war crimes.
The rally was endorsed by dozens of pro-peace organizations, including Code Pink NYC, Direct Action Front for Palestine, Jews Say No, Veterans for Peace, and several Students for Justice in Palestine chapters.