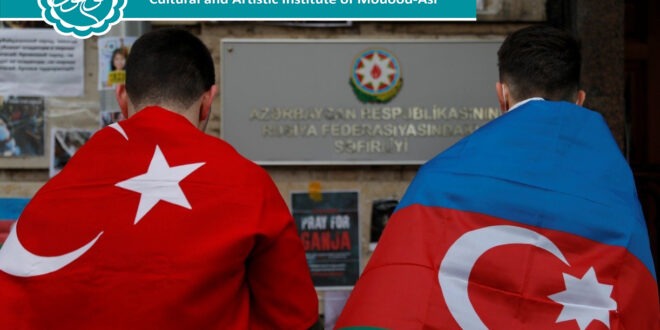 According to the Mouood report, quoting by National Interest: Iran is escalating its military rhetoric against Azerbaijan as Tehran holds its largest military exercises in three decades on its border with Azerbaijan. Meanwhile, patriotism in Azerbaijan, which is already high following its recent victory in the Second Karabakh War, is being mobilized to counter the Iranian threat.

An Azerbaijani-Iranian War Will Lead to a Regional Conflagration

A military conflict between Iran and Azerbaijan would lead to a regional conflagration. Given that Turkey just formed a security pact with Baku by signing the Shusha Declaration in June, Turkey will be certain to support Azerbaijan. Pakistan, an ally of Turkey and Azerbaijan, would also increase military pressure on Iran’s eastern border. Meanwhile, Armenia, which has been unwilling to accept its defeat, could be tempted to use the distraction of an Azerbaijani-Iranian war to retake what nationalists call “Eastern Armenia,” leading to another war over Nagorno-Karabakh. Furthermore, a regional conflagration would be detrimental for Russian security policy in the South Caucasus because it would jeopardize Russia’s so-called “peacekeeping” operation in Nagorno-Karabakh. The Kremlin could no longer pretend to be neutral if its regional allies—Iran and Armenia—were involved in military operations.

Not coincidentally, renewed regional tensions and the threat of an Azerbaijani-Iranian war came after Iran’s recently appointed president, Ebrahim Raisi, inherited an established regional geopolitical order that is in opposition to Iran. Part of this configuration is a pro-Western military and security group that consists of Turkey, Azerbaijan, and Pakistan. On July 27, Turkey, Azerbaijan, and Pakistan signed the Baku Declaration, a strategic partnership that created a new format for political and military cooperation between the three countries. The Baku Declaration reaffirmed support for the return of the occupied territories to Azerbaijan and expressed solidarity with Pakistan’s position on the disputed Jammu and Kashmir regions. In early September, Turkey, Azerbaijan, and Pakistan held the Three Brothers joint military exercise in Baku which Azerbaijani military leaders used to thank their two allies for their support during the 2020 Nagorno-Karabakh War.

Israel, which has had a security partnership with Azerbaijan since the early 2000s, belongs to this geopolitical group as well. On August 2, during a period of warming relations between Turkey and Israel, Azerbaijan opened an office to promote trade and tourism in Israel that is a prelude to opening a formal embassy. Israel opened an embassy in Baku as early as 1993.

In competition is another geopolitical group consisting of Russia, Armenia, and Iran. While Armenia’s Prime Minister Nikol Pashinyan chose to attend Raisi’s inauguration, Azerbaijan’s Aliyev did not. In addition, Armenia supported India in its territorial dispute with Pakistan.

Not surprisingly, Raisi’s appointment is leading to a deterioration of relations between both geopolitical groups. Iran’s saber-rattling toward Azerbaijan is not new; in 2007, Aliyev said that Iran was a “significant problem” and resembled a “cornered, wild animal.” Aliyev also declared that “there is no effective international mechanism to counter the threat posed by Iran.”

Last month, after describing Azerbaijan as a “Zionist entity,” Iran held its largest military exercises in thirty years on the Azerbaijani border. Iranian foreign ministry spokesman Saeed Khatibzadeh said that Iran “will not tolerate the presence of the Zionist entity (Israel) near its borders and will take what security measures it deems necessary.” Former U.S. ambassador to Azerbaijan Matthew Bryza stated that “While Iran is not trying to be ‘hostile,’ it is still showing the three countries its uneasiness over their [earlier] joint drill.” In response, and representing the third military exercise in only two months, Turkey and Azerbaijan held the Steadfast Brotherhood military exercise in early October in Nakhichevan, an Azerbaijani enclave squeezed between Armenia and Iran.

Five factors are impacting the deterioration of Iran’s relations with Azerbaijan.

The first factor is Azerbaijan’s security partnership with Israel. Over a decade ago, Iranian chief of staff Major General Hassan Firuzabadi sent a veiled threat to Azerbaijan for permitting a visit by Israeli president Shimon Peres in 2009. Firouzabadi ominously warned Aliyev that he “will face a dark future since people’s awakening cannot be suppressed” for “giving freedom to the Zionist regime to meddle in its country’s affairs,” claiming this would lead to “bans on Islamic rules.”

Although Shiite Azerbaijan’s security partnership with Israel is unusual and unique, Baku has pointed out that Shiite Iran’s cooperation with Christian Armenia, “which has occupied Azerbaijani territory,” also “contradicts the solidarity of the Islamic world.” As an American diplomatic cable reported, Iran never condemned the Christian country’s (Armenia) occupation of its Shiite neighbor’s (Azerbaijan) territory. During a May 2002 summit between former President Heydar Aliyev and Iranian president Mohammad Khatami, the latter refused to condemn the occupation, nonchalantly stating that “Armenia is not Israel, and the Azerbaijanis are not the Palestinians.”

While Iran and Azerbaijan are both majority Shiite countries, they have an important difference: Azerbaijan inherited and has maintained a secular culture from its seven decades in the Soviet Union; Iran is unwilling to accept that Azerbaijan’s secular identity is grounded in Turkic culture and is frustrated and bitter at Turkey’s growing influence inside its neighbor’s borders.

Iran, meanwhile, has attempted—but failed—to spread the Shiite revolution to Azerbaijan. In the 2000s, Sepah-e Pasdaran, the Corps of Guardians of the Islamic Revolution, trained and illegally infiltrated Al Qaeda and Hezbollah terrorists into Azerbaijan to undertake bombing campaigns against Israeli, American, and Western diplomatic facilities, police stations, and schools. Aliyev, the Israeli ambassador, Jewish teachers, and rabbis serving the ancient Mountain Jewish community were targeted for assassination.

The second factor is Iran’s unwillingness to accept a secular Shiite state that it views as belonging to Persia’s traditional sphere of influence. Iranian Shiite fundamentalism has literally no support in Azerbaijan as religion is important to only one-third of Azerbaijan’s population. Meanwhile, only 8 percent of Azerbaijani citizens—the lowest number in the Muslim world—support Sharia being made official law in their country.

Iran faces two additional obstacles in promoting its Islamic revolution to Azerbaijan: the absence of anti-Semitism and anti-Americanism in Azerbaijan. Israeli and American Jewish organizations routinely praise Azerbaijan for its absence of anti-Semitism. Tehran’s insecurity is exacerbated by its Azerbaijani minority exhibiting pro-Israeli sentiments. This is because they correctly believe that Baku’s military victory over Armenia was a product of Israeli and Turkish modern weaponry. As a member of Iran’s Azerbaijani minority wrote anonymously to Gunaz TV, a channel that caters to the Azerbaijani population in Iran, “whoever is against the Iranian regime is our friend.”

A modernizing and secular Azerbaijan also provides sustenance to the Iranian opposition by showing them an alternative path for their country to take. Azerbaijan’s example for discontented Iranians is, therefore, similar to the role that democratic Ukraine plays for the Russian opposition to Vladimir Putin‘s regime.

The third factor is Iran’s fears of separatism among the Azerbaijani minority that accounts for upwards of one-quarter of its population. The Azerbaijani minority supported Baku in the 2020 Nagorno-Karabakh War, a position which was diametrically at odds with Tehran’s support for Armenia. In 2021, the Foundation for Defense of Democracies, a Washington think tank which had close ties to the Trump administration, and Israel’s Begin-Sadat Center for Strategic Studies both called for the “dismantling” of Iran (i.e., backing Azerbaijani and other minority separatism within the country). On the Iranian-Azerbaijani border, Israel has listening posts and uses unmanned aerial vehicles to collect intelligence on Iranian military affairs. The Azerbaijani minority in Iran is an important source of human intelligence for Israel.

The fourth factor is growing Turkish influence in Azerbaijan. In the last three decades, the Azerbaijani economy and energy infrastructure have been massively developed, making it the dominant country of the three South Caucasian states, a development that is not to Iran’s liking. As an American diplomatic cable explained, “it should be understood that for a number of reasons Iran may not be objectively interested in strengthening Azerbaijan. Tehran has specific objectives related to its national security and territorial integrity and, therefore, will never allow the strengthening of independent Azerbaijan.”

Turkey clearly gained from Azerbaijan’s victory in the 2020 war. But so too did Azerbaijan, both from regaining control over one-fifth of its territory and by cementing a strategic partnership with Turkey through the 2021 Shusha Declaration. Iran is concerned that Azerbaijan will become a conduit for growing Turkish influence in Central Asia, where four out of five nations are Turkic speaking. Turkmenistan and Kazakhstan are already developing energy export outlets through Azerbaijan and Turkey to bypass Russia’s control of regional pipelines.

The Shusha Declaration was the first occasion where two countries, one from the former USSR and the other a NATO member, signed a strategic partnership which amounts to a de facto security pact. In 1994, Ukraine signed the Budapest Memorandum with three declared nuclear powers—the United States, the United Kingdom, and Russia—whereby Ukraine gave up its nuclear weapons in exchange for security assurances. Two decades later, when Russia occupied Crimea, these security assurances were seen to be worthless when the United States and the United Kingdom watched Russia flout them.

The Shusha Declaration is far more clear-cut than the Budapest Memorandum because Azerbaijan, which is not a NATO member, has security guarantees from a NATO member. A threat to Turkey under Article V of the Washington Treaty is a threat to all NATO members. Like the NATO-Ukraine Charter on a Distinctive Partnership signed in 1997, the Shusha Declaration states that “if there is a threat or an act of aggression from a third state or states against their independence, sovereignty, territorial integrity, the inviolability or security of their internationally recognized borders, the parties will hold joint consultations.”