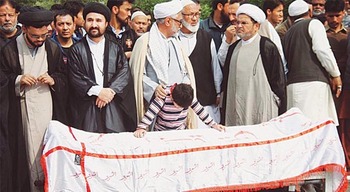 The killing of a teacher belonging to the Shia community in the Gulistan-i-Jauhar area of the city just a day after the murder of a community member in Orangi sparked protests against the government over the renewed wave of Takfiri terrorist killings.

Mohammed Kazim Raza, 39, originally hailing from Gilgit, had been

kidnapped before being shot dead and his body was dumped near Munawwar Chowrangi in Gulistan-i-Jauhar on Tuesday evening. His funeral was held at Numaish Chowrangi on main M.A. Jinnah Road. His body was later taken to the Wadi-i-Hussain graveyard, off the Superhighway, for burial on Wednesday.

The targeted killings came as a grim reminder of the murder of around a dozen people belonging to the Shia community in a series of attacks in the city a few months ago. Nearly half of them had been targeted in Gulistan-i-Jauhar and the neighbouring Gulshan-i-Iqbal area.

Protesting against the renewed wave of targeted killings in the city, the mourners who had converged near Numaish Chowrangi reiterated the demand for “effective implementation” of the National Action Plan against militants. The protesters demanded that the authorities take immediate and effective action against all the banned militant organizations.

They also asked the chief minister to take action against the police officers in whose jurisdiction the killings took place.

He said the protesters dispersed peacefully on the assurance of the police authorities that the killers would be taken to task.

Gulistan-i-Jauhar SHO Niaz Panhwar told Dawn that the victim used to teach Holy Quran to children in the area. He said it seemed that he had been kidnapped and killed somewhere else and his body was later thrown there, because no blood and spent bullet casings were found at the crime scene.

The victim sustained four gunshot wounds, the officer said. Police investigators found the mobile phone of the deceased and its call data record was being obtained to find a clue to the culprits, he added.

The police officer said Kazim Raza was a resident of Lines Area. He said investigation was under way to ascertain the identity of the killers and their motive for the murder.

However, no FIR of the kidnapping and targeted killing had been registered till Wednesday evening.

Earlier on Monday night, 38-year-old Syed Zulfiqar Hussain was gunned down in the Pirabad area of Orangi. SSP Investigation-I (West Zone) Akhtar Farooq told Dawn that police investigators were working on the case with both sectarian and political aspects being taken into consideration, because Zulfiqar was associated with the Pak Sarzameen Party.