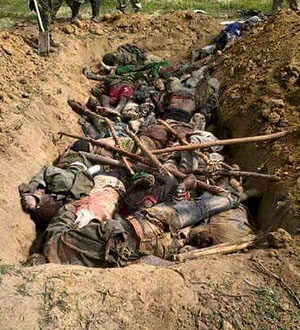 According to Human Rights Commission there are credible evidence, including but not solely photographs and testimonies, of mass graves where the army is reported to have buried mass fatalities from their killing spree of the last few days in Zaria. There have been claims that bodies have been incinerated.

One of the pieces of photographic evidence is appended below. The image [1] is graphic and caution is advised when viewing.

Human Rights Organizations are calling on the African Union, the United Nations and the Commonwealth to suspend Nigerian membership and privileges, and the take immediate action to secure the release of all those detained.

Chair of Islamic Human Rights Commission, Massoud Shadjareh said: “This is a crushing indictment of the Nigerian military if one were necessary. The international community cannot sit by and say and do nothing any longer.”
According to informed sources Nuhu Muhammad, who was shot and detained without access to healthcare, died in cell today morning.

One of the women detainees, Hawwa Aliyu, held in State CID Detention Centre in Kaduna has give birth to a child in custody. Please contact the Nigerian Ambassador / High Commissioner in your country demanding her immediate release and the immediate release of all those detained. A list of embassies / high commissions in various countries can be found here.

At a press conference at 2pm GMT, the Nigerian Human Rights Commission also confirmed that the numbers killed by the army are in the region of one thousand.
The military released 500 women and children detained since the weekend in the night of 15 December. They were left at a primary school in Samaru area of Zaria.

A separate group of 175 captives were earlier brought to Kaduna from military detention who were dispersed between different police detention centres and remain captive.

Share
Previous Saudi King to Nigeria’s Buhari: Zaria Shia Massacre is fight against terrorism
Next From Karachi to San Bernadino: In Quest of an Alternative Discourse on Terrorism