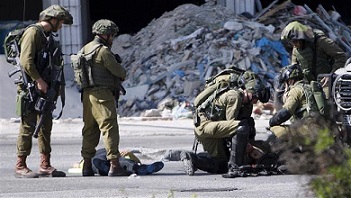 The Palestinian Health Ministry identified the victim as 22-year-old Oday Ersheid, whose brother had also been killed at the hands of Israelis during similar clashes in October.
Meanwhile, the Israeli military shot and killed another Palestinian, identified as Issa Hroub, 55, near al-Khalil, claiming he had attempted to ram his car into Israeli forces at a checkpoint there.
On the same day, another Palestinian was shot and injured by Israeli soldiers after he allegedly opened fire at the troops at the Gilboa crossing near Jenin.
In the besieged Gaza Strip, violent clashes broke out between Palestinian demonstrators and Israeli soldiers, who opened fire and killed a 41-year-old man.
Ashraf al-Qidra, spokesman for Gaza’s Ministry of Health, said the victim, Sami Shawqi Madhi, was shot in the chest and died on the spot.
According to the ministry, nearly 70 Gazan protesters were also injured by Israeli forces, most of them with live ammunition.
Tensions between Palestinian protesters and Israeli forces in the occupied West Bank and the Gaza Strip are showing no sign of abatement. The wave of unrest was triggered by Israel’s imposition in August of restrictions on the entry of Palestinian worshipers into the al-Aqsa Mosque compound in East al-Quds.
Palestinians are also angry at increasing violence by Israeli settlers, who frequently storm the al-Aqsa Mosque, the third holiest site in Islam. The Palestinians say the Tel Aviv regime seeks to change the status quo of the compound.
Nearly 120 Palestinians and about 20 Israelis have been killed in the recent wave of clashes between Palestinians and Israelis since the start of October.
According to the The Palestinian Prisoners’ Society (PPS), 85 percent of Palestinians who were killed by Israeli troops since the beginning of violence were “extra-judicially executed.”
PPS said Israeli troops have resorted to “direct shooting and killing” instead of detaining Palestinians who are suspected of carrying out attacks on Israeli targets. It said most of the fatalities did not even pose a threat to the troopers’ life.