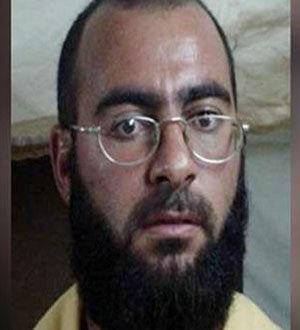 Iraq says it has hit the convoy of the chief of Daesh Takfiri terrorist group in an airstrike in the western Anbar Province.
In a statement on Sunday, the Iraqi military said the country’s Air Force had hit the convoy of Ibrahim al-Samarrai aka Abu Bakr al-Baghdadi, but added that his fate is as of yet unknown “as he was carried to a vehicle.”
Iraqi Interior Ministry spokesman Saad Maan said the strike took place “Saturday, at noon.”

“The Iraqi air force carried out a heroic operation targeting the convoy of the criminal terrorist Abu Bakr al-Baghdadi,” the statement said.
Iraqi media say Samarrai, injured in the airstrike, was moved quickly from the scene of the attack.
The statement by the Iraqi military said the elite intelligence section of Iraqi Air Force targeted the convoy of the terrorist leader after gathering precise information about Samarrai’s plan to attend a meeting of Daesh operatives in the restive province of al-Anbar.
It added that “the Hawks Cell of the Interior Ministry was able to carry out a brave operation through bombing the convoy of the terrorist criminal Ibrahim al-Samaraei.”
The venue of the planned meeting in the town of Karabelah was also bombed by Iraqi warplanes with an unknown number of senior members of Daesh killed.
Samarrai’s “health condition is still unknown and we will publish soon the names of the terrorists who were killed in this heroic operation,” the statement said.
Hospital sources and residents said a number of Daesh Takfiri leaders were killed in the airstrike in a western Iraqi town, but Samarrai was not among them.
The development comes hours after an announcement by the Iraqi army that it managed to fly its first combat drone in its fight against Daesh terrorists in Anbar, taking off from the al-Kut airbase in Wasit Province.
Samarrai, who declared himself leader of Daesh militants operating in Syria and Iraq last year, was reportedly wounded in March in a US-led airstrike.
Born in the Iraqi city of Samarra in 1971, Samarrai joined a militancy which took shape following the US-led invasion of Iraq in 2003. He is also thought to have served time in a US military jail in southern Iraq.
Earlier in the day, the Daesh executed about 60 of its own members, as reports suggested that the militants are in a state of panic and terror after heavy shelling by Iraqi security forces.
Meanwhile in neighboring Syria, army forces, backed by Russian jets, managed to make gains in their war against Daesh.
Russia launched its airstrikes against the terrorists in Syria last month, one year after the US, the leader of the so-called international anti-Daesh coalition, started its campaign to target militant positions in the country.
Iraq has also announced that it planning to ask Russia to carry out airstrikes against the militants, which have seized parts of the country’s western and northern regions.
Daesh militants currently control large areas of both Iraq and Syria, where they have killed many people over the past few years.