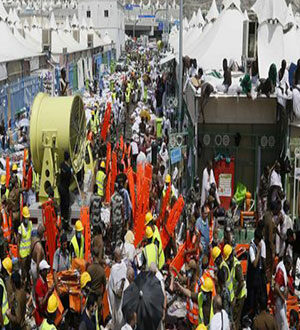 “Offering condolences to the bereaved families of the killed pilgrims, I declare three days of national mourning in the country,” Ayatollah Khamenei said in a message on Thursday.

“The Saudi government is obliged to accept its heavy responsibility in this bitter incident and meet its obligations in compliance with the rule of righteousness and fairness; mismanagement and improper measures that were behind this tragedy should not be undermined,” the Leader said.

Earlier today, Head of Hajj and Pilgrimage Organization Saeed Ohadi said that in Hajj stampede in Mena as many as 90 Iranian pilgrims have been confirmed dead with 150 others injured.

Speaking to IRNA, Ohadi said that according to statistics released by Saudi officials, 1,000 pilgrims have lost their lives and a similar number have been injured.

Following the deadly incident during Hajj rituals, 200 medical teams were dispatched to the scene to help those injured, Ohadi said.

He said that Saudi hospitals have difficulty for accepting the injured pilgrims and do not allow Iranian doctors to enter and help.

Noting that most of the victims are from Nigeria, India and Pakistan, Ohadi said that at present bodies of a large number of the victims and injured persons are still on the ground.