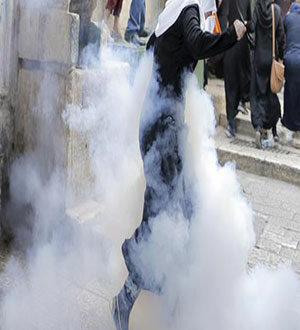 Hundreds of Palestinians have held a demonstration in the blockaded Gaza Strip in protest against the Israeli regime’s latest attack on the al-Aqsa Mosque compound in East al-Quds (Jerusalem).
During the protest rally, which was called by the Palestinian resistance movement, Hamas, the demonstrators chanted anti-Israeli slogans and called on the Arab League to take action against the attack.

In an address to the crowd, Hamas official Mushir al-Masri, condemned the Israeli regime’s Sunday raid on the holy site and the Palestinian worshipers inside.
He further urged the Palestinian Authority to express support for the holy mosque and end its security cooperation with Israel.
People also took to the streets of al-Quds to condemn Israel’s latest assault on the al-Aqsa Mosque.
Palestinian resistance groups in a joint statement have also called for protests on Friday in condemnation of the attack.
Earlier in the day, Israeli forces stormed the holy site and clashed with the Palestinians inside.
According to Palestinian witnesses, Israeli forces entered the mosque and caused damage.
The clashes broke out hours before Rosh Hashanah, or the Jewish New Year. The Israeli regime usually imposes restrictions on Muslim worshipers’ access to the al-Aqsa Mosque on the first days of Rosh Hashanah.
Palestinians say the Israeli regime is planning to change the status quo of al-Quds and Judaize the city.
The al-Aqsa Mosque compound, located in the Israeli-occupied Old City of al-Quds, is a flashpoint holy Islamic site. The location of the compound, known to Jews as the Temple Mount, is the holiest site in Judaism. The mosque is Islam’s third holiest site after Masjid al-Haram in Mecca and Masjid al-Nabawi in Medina, Saudi Arabia.

Share
Previous Al Saud incapable of running Mecca affairs: Iran cleric
Next Obama Urges Vigilance as he Leads US in Remembrance of 9/11