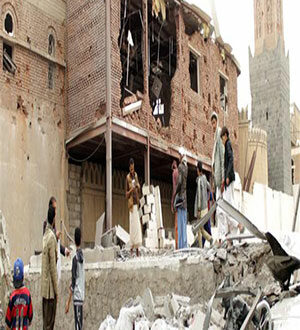 Human Rights Watch (HRW) has censured the Saudi regime for apparently committing a war crime against the Yemeni nation during its ongoing airstrikes on the impoverished country.
The New York-based rights group said the regime in Riyadh has committed an “apparent war crime” by carrying out a fatal aerial attack on a residential area of Yemen last week.

The HRW has confirmed that the strikes of July 24 on residential compounds by Saudi warplanes in the Yemeni Red Sea port of Mokha killed at least 65 civilians, including 10 children.
Ole Solvang, the senior emergencies researcher with the HRW, said the Saudi regime committed a war crime by repeatedly striking two compounds housing the families of workers at the Mokha Steam Power Plant.
“With no evident military target, this attack appears to be a war crime,” Solvang said.
The Saudi monarchy has failed to investigate alleged breaches of the rules of war during the bombing campaign it launched against the Yemeni people back in March, the rights group said.
The HRW said the “failure of Saudi Arabia … to investigate apparently unlawful air strikes in Yemen demonstrates the need for the United Nations Human Rights Council to create a commission of inquiry.”
Human Rights Watch has also slammed the Saudi naval and aerial blockade of Yemen.
The group recently accused the United States of complicity in the Saudi war of aggression against Yemen. The HRW said Washington is potentially liable in the unlawful strikes as the US is involved in refueling warplanes flying over Yemen and also in providing intelligence for the Saudis.
Saudi Arabia has been carrying out airstrikes against Yemen since March 26 – without a UN mandate. The strikes are meant to undermine the Houthi Ansarullah movement and restore power to Yemen’s fugitive former President Abd Rabbuh Mansour Hadi, a staunch ally of the Al Saud regime.
The United Nations says the Saudi war on Yemen has killed 1,900 civilians and wounded over 4,180 since late March. However, local sources have given a much higher number of fatalities, with some of them putting the total death toll at nearly 5,000.

Share
Previous Imam Khomeini’s Last Will and Testament
Next WHO says nearly 4,000 killed in Yemen since late March