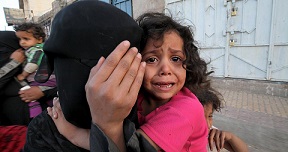 The United Nations announced on Thursday that a humanitarian truce will go into force in Yemen on Friday to allow urgently needed aid to reach civilians in the war-torn country facing the threat of famine.
The pause in fighting will go into effect at 23:59 local time (2059 GMT) on Friday until the end of the holy month of Ramadan on July 17.

The announcement came eight days after the United Nations declared Yemen a level-3 humanitarian emergency, the highest on its scale, with nearly half of the country’s regions facing a food crisis.
“It is imperative and urgent that humanitarian aid can reach all vulnerable people of Yemen unimpeded and through an unconditional humanitarian pause,” UN spokesman Stephane Dujarric said Thursday.
UN Secretary-General Ban Ki-moon has received assurances from the Houthis and other parties that “the pause will be fully respected and that there will be no violations from any combatants under their control,” he added.
More than 21.1 million people — over 80 percent of Yemen’s population — are in need of aid, with 13 million facing food shortages.
Access to water has become difficult for 9.4 million people, according to the UN.
Ban had repeatedly called for a humanitarian ceasefire to allow badly needed aid to be delivered to civilians suffering from the air war and the rebel offensives.
Yemen has been since March 26 under brutal aggression by Saudi-led coalition. Thousands have been martyred and injured in the attack, with the vast majority of them are civilians.
Riyadh launched the attack on Yemen in a bid to restore power to Yemen’s fugitive Hadi who is a close ally to Saudi Arabia.

Share
Previous The Holy Prophet’s (S) Be’that: The Beginning of a new Historical Era
Next UN: Israeli 2014 War on Gaza Most Deadly since 1967