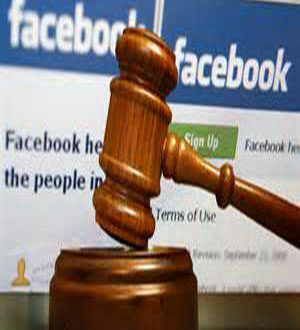 A few days ago Facebook asked me to change my user name. The name I had chosen wasn’t obscene, it did not incite to racial hatred, it was not an attempt to usurp the name of the all-powerful Mark Zuckerberg (Facebook’s CEO, founder and majority shareholder), nor was it even vaguely similar to a registered trademark. I had chosen a name composed entirely of Braille characters. The engineers at Facebook had suddenly decided that this was no longer acceptable.
When I signed up, Facebook asked me for my real name and verified my identity by getting me to enter a confirmation code they sent to my mobile phone. They also pressed me to tell them my email password so as to be able to access my address book and retrieve my contacts – my “friends” in house terminology.

Facebook offers a cosy cocoon to its members, who can use it to communicate without being flooded with spam. It is monitored around the clock using algorithms to ensure compliance with conditions of use that nobody ever reads. The advertising is relatively discreet, and one can, at leisure, look at friends’ photos, laugh at or get indignant about the same news items, play the same games and catch up on their personal news, from the trivial to the momentous: messages exchanged on Facebook cover the full spectrum of human thought, from vital facts such as “I’m taking a shower”, via birth announcements to the sharpest observations on modern art (1).
Interactions on Facebook are always positive: you are allowed to say you “like” something by clicking on an icon, but not that you dislike it; Facebook sends you a message when someone accepts you as a friend but not when they dump you. There are various safeguards to protect users: if you are travelling and log on from an unusual location, you have to submit to a (playful) interrogation, based on photos, to prove your identity.
But Facebook can sometimes be arbitrary. Sensitive pages – such as those created by a support group for Bradley Manning, the US soldier accused of having passed military secrets on the war in Iraq to WikiLeaks – are occasionally suspended, then reinstated a few days later, without any explanation. To help prevent spamming, members are invited to report nuisance messages: Facebook then suspends the nuisance user’s account. All kinds of activists have used this manoeuvre to get their political adversaries suspended. Facebook also occasionally succumbs to the temptation of censorship, blocking links to file-sharing, artistic or political websites – or sites such as such as seppukkoo.com, which tells users how to delete their information and leave Facebook.
This clever mixture of private life and voyeurism, a sickly-sweet diet of moderate transgression and monitored freedom, has proved to be a winning recipe for Zuckerberg. Facebook has accumulated a prodigious 500 million subscribers of whom 50% log on every day, and for a total of 700 billion minutes every month. Some 200 million people access the site from their mobile phones. Having started from nothing – or almost, since the prestige of Harvard University played a not insignificant part in its dazzling launch in February 2004 – Facebook is now the world’s largest website, although it still has only 1,700 employees.

Just click ‘like’
The personal data supplied so freely by Facebook users are highly coveted. They allow far more precisely targeted marketing – by gender, age, date of birth, language, country, city, educational background, interests, etc – than traditional media surveys, to audiences approaching the size of those commanded by television. As of 13 December, Louis Vuitton, the maker of luxury luggage, was in direct communication with 1,731,698 internet users. By clicking the “like” button, these people encouraged their friends to do the same. The content of the Louis Vuitton page ranges from fashion shows to the singer Bono’s travel blog “The Heart of Africa”.
Among the most popular pages are those of brands such as Starbucks, Coca-Cola and Oreo, which attract audiences of 10-25 million. But the big brands aren’t alone in working this seam. At their own level, local tradesmen, lesser-known authors and small businesses use the same system to promote themselves. Even Le Monde diplomatique has joined in: its French Facebook page, set up at the end of 2009 on the initiative of a subscriber, already has 49,048 followers. (Its more recent English page has 2,309.)
By allowing users to create and polish their personal brand, Facebook has become the magic mirror of our narcissistic and self-publicising era. The Facebook experience gives users the impression of being on stage, performing in front of 130 people (the average number of “friends”), who applaud their every gesture and witticism. The more faithfully the electronic mirror reflects our personality – or how we would like to think of ourselves – the more we become intoxicated with our reflection (2). This encourages users to feed their Facebook page, sometimes compulsively, by posting information on their likes and dislikes, their address and their location in real time, using various geo-positioning techniques, or chronicling their love life.
But Facebook doesn’t plan to stop there: it is now trying to extend its operation from a members-only site to the whole web. Since April 2010 Facebook has offered a “like” button that webmasters can build into their site to facilitate “buzz”; thanks to this seemingly innocent function, already implanted on a million websites, Facebook boasts that it can track the visits of 150 million individual users on the web every month and thus refine their profiles. The better to serve internet users (and the better to pin them down), Facebook has also recently launched an electronic messaging service offering email, SMS and chat functions. This has brought it into direct competition with Google, the other internet giant.
Facebook guarantees that only our friends can access the mass of text and image information that constantly pours into its databases. In November 2010 an investigation by The Wall Street Journal revealed that some of the biggest game operators on Facebook were holding the personal data of gamers and their friends. Facebook decreed a “zero tolerance” policy on data brokers and gave an assurance that it “has never sold and will never sell user information”. (Clearly, this statement overlooks the Patriot Act, which allows the US authorities to requisition personal information held in the US.)
In 1993 a memorable cartoon in The New York Times explained that “on the internet, nobody knows you’re a dog”; in 2010 anonymity is on the way to being abolished. At the Techonomy conference on 4 August 2010, Google’s CEO Eric Schmidt said: “Show us 14 photos of yourself and we can identify who you are. You think you don’t have 14 photos of yourself on the internet? You’ve got Facebook photos!” This state of affairs was not only irrevocable but also, in his eyes, necessary: “In a world of asymmetric threats, true anonymity is too dangerous… You need a name service for humans… governments are going to require it.”
Although it is still possible to cheat, it will be increasingly difficult to do so in the future. The world’s most powerful online architects and its political leaders plan to “civilise” the free internet, which they still see as a lawless zone. If they succeed in domesticating the internet, stating your real identity will be the price you have to pay in order to enjoy full access. The word “web” was originally an image used to describe a decentralised system of interconnected information networks. Nobody imagined that a spider would actually take up residence at its centre and start spying on the activities of all internet users.