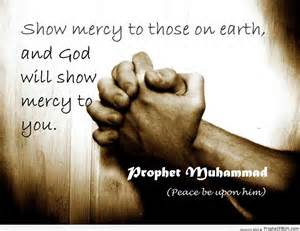 The Great Moralilty of the Holy Prophet (S.A.W.A.)

Allah’s has been reported by Imam al-Baqir (a.s) to say:
I will not quit five habits until the moment of my death: wearing coarse clothes, riding a mule without packsaddle, eating with the slaves, weaving footwear with my own hands, and saluting children so that it will become a tradition after me.
A Jew Becomes Muslim by the Holy Prophet
Imam Musa (a.s) quoted Imam Ali (a.s) as saying, “Allah’s Messenger owed a few dinars to a Jew, so he asked for it. The Holy Prophet said, “I can’t pay it now.” The Jew said, “I will not leave you until you have paid my money.”The Holy Prophet said, “Then I will sit beside you.” He sat beside that Jew for a long time during which he performed all his prayers.

Pages: 1 2 3 4
Share
Previous The Great Moralilty of the Holy Prophet (S.A.W.A.)
Next Why was Imam al-Reza (A.S.) Invited to Khurasan?