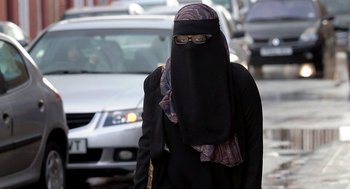 On Nov. 22, Fahy attacked a Polish Muslim woman who was wearing a veil in Wales. He swore and shouted at the Muslim woman and loudly said: “take that f*****g thing off your face” and “go back to your own country,” in the middle of the street. The woman, who has been living in Britain for nine years, followed the man to note his address and then called the police.

Representing Fahy at the court, Anthony O’Connell said his client was “fearful” because he couldn’t see the woman’s eyes, according to local reports.

District judge David Parson told to Fahy that only his “clean character” and “age” was saving him from a jail sentence and Fahy was also ordered to pay the Muslim victim a 200 pound compensation.

Speaking about the incident, Aliya Mohammed, Chief Executive Officer at Race Equality First, told Anadolu Agency on Wednesday that hate crimes are a growing problem in the community.

“In Swansea we have seen a Polish Muslim woman challenged, intimidated and verbally abused by a 75-year-old man for covering her face. We live in a democracy and women have every right to dress as they choose.

“No woman deserves to be harassed for the way that she looks or dresses,” she said and added, “Hate crime is a tarnish on the fabric of our society and it is unfortunately a growing problem that we are seeing people from our diverse communities face.”

There has been a surge in hate crimes across Britain in the wake of June’s referendum, which saw Britons vote to exit the EU with immigration as one of the key issues. At its peak, there was a 58 percent increase in hate crimes and police recorded more than 14,000 such crimes in the period running from a week before the vote to mid-August.

The Muslim Council of Britain, the U.K.’s largest Muslim umbrella body, wrote a letter last month to major British leaders to stand in solidarity with Muslim communities and called for political leadership on the worrying growth in Islamophobia in the country.

Tell Mama, a British group that monitors anti-Muslim incidents, said more than 100 mosques and Islamic organizations in the last three and a half years were targets of anti-Muslim attacks across the country.

In a shock referendum result, Britain voted on June 23 to leave the 28-nation European Union. Pro-Brexit supporters campaigned heavily on immigration and the need to regain control on Britain’s borders, in a referendum battle fought against the backdrop of Europe’s worst migrant crisis since World War II. As well as “intolerance,” which it said was promoted by the U.K. Independence Party (UKIP), the report also noted criticism of Prime Minister David Cameron when he spoke in July 2015 about a “swarm” of migrants trying to reach Britain.

In response to increasing violence against Muslims and refugees across the country, The British government plans to ban an extreme right wing group, National Action under the Terrorism Act 2000 – the first time a right-wing organization has been banned under the legislation.