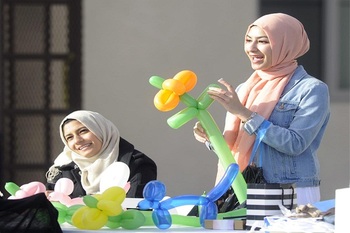 “What a great way to spend the first day of the year,” the Golden West College student said.

At least two dozen of the male members of her youth group were sweating it out on the basketball courts on a sunny, crisp morning, holding their first charity basketball tournament to benefit the homeless.

The women were getting hygiene kits ready and preparing for a bake sale, barbecue, henna art sessions and later, a pingpong game. All proceeds would go to the homeless. They hoped to raise more than $1,000 Sunday.

Mukhlis said she visited some of the homeless encampments by the Santa Ana riverbed a few days ago.

“They want just little things like toothpaste, gloves and things we take for granted – like hand sanitizer,” she said.

The mosque homeless ministry has picked up momentum over the past couple of years, said member Nayyer Alam of Westminster.

For four years, the mosque’s food pantry, which partners with others in the area such as Second Harvest Food Bank and Community Action Partnership, has fed those in need, he said. Between 11 a.m. and 1 p.m. every Monday, 70 to 80 families are served at the mosque’s pantry, Alam said.

Volunteers from the mosque join other houses of worship in the area, making trips to the Santa Ana Civic Center to provide hot breakfast and other necessities to hundreds of homeless there, he said.

“There is a tremendous need, right here, in our backyard,” he said. “We got a chance a few weeks ago to visit the homeless encampments (by the river). The conditions there are tough. These people have nothing.”

The mosque is collecting tarps, blankets, warm clothing and hundreds of pairs of shoes to distribute to the homeless by the river and in Santa Ana in the next few weeks, Alam said.

On Jan. 28, the mosque plans to partner with the Islamic Circle of North America’s Anaheim clinic to hold medical clinics at the mosque once a month to help those without health insurance.

“All our programs are open to the entire community, not just to Muslims,” Alam said.

Waqas Anis, a member of the mosque’s youth group, said this event was teaching him and others they should be grateful for what they have.

“We have food, shelter, water,” the Orange Coast College student said. “I know homeless people in my own neighborhood in Garden Grove who’ve been that way for years.”

Tim Houchen, founder of Hope 4 Restoration, a nonprofit that helps the homeless, said nearly 35,000 households in the county are just one financial problem away from losing their homes.

“We live in a county where it’s easy to become homeless,” said Houchen, who was homeless for several years in Santa Ana. “People are not paid the kind of wages it takes to even rent a single-bedroom apartment in Orange County.”