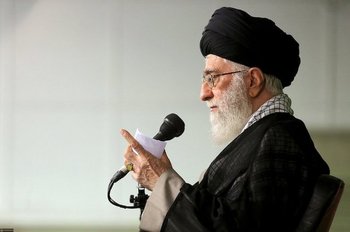 Ayatollah Khamenei issued a religious decree (Fatwa) wherein he prohibited insult towards Aisha, the wife of Prophet Muhammad (pbuh), and any of the figures and symbols celebrated by Sunni brethren.

The Leader of the Islamic Revolution said, in response to a question on religious matters, “Insulting figures and symbols celebrated by Sunni brethren, including the wife of the Prophet of Islam [Aisha] is prohibited. This includes the wives of all prophets, particularly the master of all prophets Muhammad (May God’s greetings be upon him and his household).

In response to a question, where he was asked to comment on insult and use of offensive words against the wife of the Prophet (pbuh) Aisha, Ayatollah Khamenei issued the decree (fatwa) against insulting Aisha. The question was posed by a group of Shi’a scholars and intellectuals of Al-Ahsa region in Saudi Arabia.

The question was brought up after a supposed Shia clergyman, who fled to Britain as a refugee, launched a Television channel with the help of the British government; he used his channel to insult Aisha, the prophet’s wife: the clergyman falsely described his act as Shia belief.

This is not the only case wherein Ayatollah Khamenei has called insulting Aisha and other Sunni sanctities as haram (religiously forbidden).

Western arrogant powers pay their mercenaries to insult the Mother of the Faithful, Aisha

Preparation in the outer world is another aspect: The devils that attack us will not always attack with the same strategies. The modern day fiends who attack you through internet, satellite channels and highly advanced tools of communication have modern things to articulate with; their hardware and software have been modernized. They create fallacies. They create ideological problems. They give rise to intellectual confusion. They promote despair. They foment discord. I have received reports that petro-dollars are being spent, currently, on certain projects to fuel discord. Often these reports are not made available to the public. On the one hand, they are spending huge amounts of money in order to establish anti-Shia groups among Sunni Muslims in certain Islamic countries. On the other hand, they pay certain so-called Shia preachers to insult and level allegations against the Mother of the Faithful, Aisha, in the name of Shia Islam: these are their methods. As Shia or Sunni Muslims, what do you do when you are faced with these methods? Ultimately, we must not be deceived by what they do: discord among us is the greatest blessing for them.

In a meeting with agents of Sadaf Kowsar Conference, held this year as a tribute to Hazrat Khadija, Ayatollah Khamenei said: “Disrespecting the pure wives of the prophet (pbuh) should be avoided. The Prophet’s (pbuh) wives are all respectable; anyone who insults any of them has insulted the prophet. I resolutely declare this offensive. The commander of the Faithful, Imam Ali (pbuh) treated her eminence Aisha in such a respectful manner. He treated a woman, who had come to fight against him, with the utmost respect because she was the prophet’s wife; otherwise the Commander of the Faithful (as) would not stand on a ceremony with anyone: hence, no such disrespect should ever occur.”