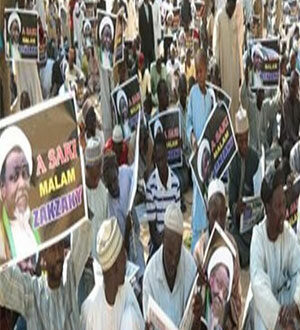 WE DEMAND THE IMMEDIATE RELEASE OF OUR LEADER…..

The unequivocal demands of participants in the rally on 1st January 2016 organized by members of the Islamic movement in Nigeria after the Friday prayers at Fagge mosque were the release of the leader of the Islamic movement in Nigeria, His Eminence Shaikh Ibraheem Zakzaky (H). Participants also demand the release of all members of the movement held and are been tortured by security officials of Nigeria. In addition is the compensation to the lives and properties destroyed.

Mal Sunusi Abdul Kadir delivered speech at the rally in which he spoke of the personality of our Noble Prophet (S’) and the place he has in our heart while explaining the significance of prophet birthday of which our leader, His Eminence Shaikh Ibraheem Zakzaky (H) has shown us the foot step to follow in upholding the rightful place of Prophet in our hearts.

Mal Sunusi also reiterated the demand of all the members of the Islamic movement as stated earlier, stating we shall follow due process and wouldn’t relent in upholding our rightful demands.

He also narrated the painful scenario of about 128 Muslim Darika Tijjani brothers referred to Almajiri of whom the government have taken into custody and tortured trying to force them accepting that they are Boko Haram, which they don’t have any form of connection. He then called for the immediate release of these fellow Muslims.

A prayer session was later held at Kano center extending plea to the Almighty for urgent help.

Share
Previous Awakening not suppressible: Leader’s tweet on Nimr’s execution
Next Man with phone in hand fatally shot by US police