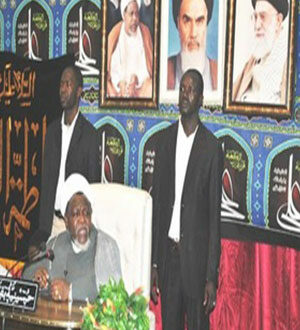 Family of Sheikh Zakzaky: Unclear If He is Dead or Unwell

In a recent phone conversation with the son of the leader of the Islamic Movement in Nigeria (IMN), Sheikh Ibrahim Zakzaky, we learned that Mr. Zakzaky’s family has not spoken directly to him since his arrest on Sunday.
Ibrahim al-Zakzaky’s son says his family has not been able to contact the Nigerian Shia leader since his arrest by the country’s forces earlier in the week.

According to the son, Mr. Zakzaky’s family does not know about his current medical condition and want him to see a doctor immediately. The family has not even been able to speak to any officials who have had direct contact with Mr. Zakzaky. Instead, the son informed that a military official assured the family that their patriarch is “safe and well”.

“We are concerned [Mr. Zakzaky may not be alive]. We want a doctor to speak to him who we can trust,” New York-based news agency Sahara Reporters, which tracks developments in Nigeria, cited the son as saying in a Thursday report.

The news agency also said that Zakzaky’s family has not been able to speak to any officials who have had contact with the Shia cleric.

Nigerian forces raided the house of the head of the Islamic Movement of Nigeria in the country’s northern city of Zaria, in Kaduna state, on Sunday and arrested him after reportedly killing individuals attempting to protect him, including one of the movement’s senior leaders and its spokesman. According to media reports, dozens of people are believed to have been killed in the raid.

Britain-based Islamic Human Rights Commission (IHRC) said on Wednesday that there was credible evidence of mass graves in Nigeria following the Sunday massacre. The body, which put the toll at over 1,000, said that the Nigerian military had secretly buried hundreds of bodies in the graves after storming the house of the Shia leader.

Nigerian soldiers had opened fire on Shia Muslims attending a ceremony at a religious center in the city on Saturday. The Shias had reportedly stopped the convoy of Nigeria’s Chief of Army Staff Lieutenant General Tukur Yusuf Buratai as Zakzaky was planning a speech in the religious center.

The son is the only one of Mr. Zakzaky’s children not currently jailed or dead. The son told that 3 of his brothers were reportedly killed and, therefore, he is Mr. Zakaky’s last remaining son.

He also expressed concern about reports of mass graves, which were being kept hidden by the Nigerian army.

Meanwhile, a photo circulating on social media appears to show Zakzaky having been seriously wounded.