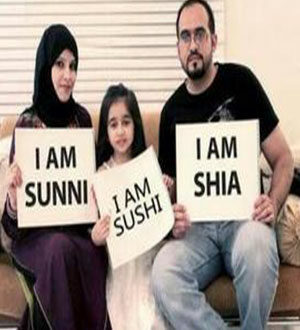 Shia Muslims Are Not ISIS; ISIS Are Not Shiites

The Holy Qur`an states “And follow not that which you have no knowledge of, Indeed, the hearing, the sight, and the heart, all of these, shall be questioned (by Allah)”. Quran 17:36

The Islamic Scripture like any other Divine Book echo’s a word of caution to mankind against perjury. The Qur`an and Sunnah caution Muslims not to say or witness, things that one has neither heard, seen nor have knowledge of. For the ears, eyes, hearts and other parts of the human body shall be held responsible for their deeds on the Day of Resurrection.
The case of the above Divine caution abounds in an incident which occurred last week, published in the Daily Graphic of Thursday, November 19, 2015 edition captioned “Construction of `ISIS Centre` at Akyem Asene” near Oda in the Eastern region. The Akyem Asene Zongo Chief who is said to be a Wahabi and police officer stationed in Accra, accused the Shia youth of constructing an ISIL-ISIS Center in the community. He is reported to have also accused the Islamic Republic of Iran, of training hundred of Ghanaian Shia youth to embark on terrorist activities in Ghana. It is on the basis of the above, that the Office of Shia National Imam, Ghana deems it fit to come out with a `strong` but logical response to demystify the fictitious allegations labeled against the Shia adherents and its peaceful and civilized ideology in Ghana and beyond. It was a calculated attempt to divert the issue of Muslim extremism and terrorism away from realities.
On behalf of the Shia fraternity in Ghana, the Office of Shia National Imam, Ghana uses this medium to commend the Oda divisional police commander, Chief Supt Ebenezer Ampofo, for setting the records straight by strongly denying the allegation.
Without a slight of doubt, neither the ideology nor adherents of Shia can be linked with ISIL-ISIS. ISIS and Shia are odd bed- fellows. The ideology of Shia is an existential threat to the ideology of criminal gangs like ISIS, Taliban, Boko Haram, al-Shabab, al-Nusra, al-Qaeda and other terrorist organizations. It is on this basis that Leader of the Islamic Revolution Ayatollah Seyyed Ali Khamenei addressed the youth in Europe and North America to study, search and investigate in order to identify the ideological root of Muslim radicalism and terrorism as part of the solution to combat terrorism.
Linguistically, “Shi’a” is an Arabic noun which means group, party, sect, and supporter. The term has been used in the Holy Qur’an in varied connotations in the following Chapters: Qur`an 3:67, 37:78-83, 2: 134 28:15, 6:65 etc. Its technical sense has been interpreted to mean a Muslim who believes in Imam Ali (cousin and son-inlaw of the Holy Prophet) as the first genuinely appointed successor of the Holy Prophet (s). Thus a follower of Islam is known as” Muslim” whereas a Muslim who believes in Imam ‘Ali (as) as the immediate successor and caliph of Prophet Muhammad is also known as” Shi’a”.
Shia Muslims have been victims of terrorism from time immemorial to this contemporary times. A case in point is the terrorists attacks by the Jama-at Ahlu Sunna Lidda`wati wal Jihad (i.e. Boko Haram) against Nigerian Shia procession in Kano on Friday November 27, 2015 killing 21 people and wounding several others.
On the issue of ISIL-ISIS, Shia Muslims’ in Ghana have tried within the frame-work of thier capability to desist from name-calling and card stacking just to deepen and expand the intra-religious peaceful co-existence in the country. The world is in a destabilizing time and the Asene Zongo chief/police officer needs to be cautioned by national security and other stake-holders for the following reasons:

It may compel the Shia to react `swiftly` through the media and if they do, the ignorant public may get to know which Islamic ideology poses a significant threat to humanity from time immemorial to these contemporary times.
It may also enlighten the people more into understanding that even those ISIS recruits in Ghana are not Shiittes but radical Wahabi youth like Nazir Nortei Alema and the like.
It will also make people understand that in 2009, the Nigerian Under-wear suicide bomber Abdul Mutallib Muhammad who visited Ghana was not a Shia and thus was not accommodated by the Shia. He knew and was able to trace and find his ideological rout in Ghana.
It may also make people reflect that the Kenyan Mall attacks that killed our veteran Diplomat, scholar and statesman Professor Kofi Awonor of ever blessed memory was not carried out by Shia.
It may also unveil the open-secret about the number of countries who have founded, funded, trained and ideologically motivated and promoted ISIS-ISISL.

Without a slight of doubt, the ideological root of Muslim terror cannot be traced through Shia. The followers of Ahlul Bait(house hold of prophet Muhammad) are not terrorists and can never be terrorists. Having identified the ideological root of radicalism and terrorism, the Arab Republics of Egypt and Jordan have reportedly taken a step to de-radicalize Muslim youth in their countries by banning books written by Wahabi scholars from Egyptian Libraries, schools and other places of learning.
They have already confiscated 7,000 books and CDs from mosque libraries in Cairo, Alexandria and Giza. The authors of these materials are Hasan al Banna, Sayyed Qutb, Sheikh Wagdi al-Ghoneim, Sheikh Yusuf al-Qaradawi, Sheikh Muhammad al-Maqsood, Yasser al-Burhami, Sheikh Abu Ishaq al-Huweini, Sheikh Mohamed Hussein Yacoub, Sheikh Mohammed Hassan.

We are in a scare mongering time. Thus we all hail from a world whose many parts are currently burning in fire of Muslim radicalism and terrorism. Every state including Ghana is passing through a critical period in the struggle against forces of extremism and terrorism. We wish to state without prejudice that no Shia organization or individual has ever been linked with ISIL-ISIS. No Shia sect is a threat to humanity and no country including Ghana is threatened by the ideology of Shia (Ahlul Bait). Shiism is synonymous with peace, truth, love, knowledge and civilization.

To discover the reality, all the terrorists organizations threatening the human race, moving across all borders like Jama-atu Ahlu Sunnah Lida`wati wal-Jihad (i.e. Boko Haram), ISIL-ISIS, al-Qaeda, al-Nusra, al-Shabab, al-Murabbitoun, etc are not Shiites’ but extremists who follow the ideology of Wahabism, who slaughter Muslims and Christians, bomb mosques, schools, markets, cemeteries. The recent coordinated terrorist attacks in France, Mali, Kenya, Nigeria, Niger, Egypt, Tunisia, Lebanon etc were carried out by Wahabi adherents and not Shiites’`.

To therefore label the Shia youth of establishing an Iranian-sponsored ISIS centre was a bit much misplaced, absurd and amateurish. The leprosy has indeed been left uncured whilst paying heed to common rash.

The UK and other Western countries earlier described Yusif al- Qaradawi as moderate Muslim. Qaradawi lost this attribution when he stated that Palestinian suicide bombing was Islamically lawful. The same cleric called on all Muslim terrorists around the world to wage jihad against Bashar al-Assad in Syria in 2011. All books written by this man have been abolished and banned from Egyptian. Their reason: his works teach radicalism and terrorism as lawful in Islam.

In any educational and ideological system there is freedom of expression. The Holy Qur`an has exhorted Muslims to express and argue with wisdom, rationality and good exhortation (Quran 16:125). This means constructive criticisms make society dynamic, it also gives a Muslim certain level of responsibility, enhanced trust, frankness and better sense of liability. This is done when ideas are freely and responsibly expressed. To suppress constructive freedom of expression, therefore, is to sterilize the society.
However, unproductive criticisms threaten social harm such as those that misinform, incite illegal acts and omissions or fan religious disunity. In these circumstances, we call on the Acting Inspector General of Police Cop. John Kudalor to call the police officer who is also a chief to order, since his utterances have the potential to incite sectarian sentiments and violence.
All countries are at war against extremism and terrorism. Ghana`s security services need to consolidate the security and stability of the country by restricting the reckless usage of freedom of expressions especially by members of the security forces, civil society groups, religious and traditional authorities. The media both print and electronic must always exercise professionalism and extreme level of caution in order not to promote chaos by churning out publications that misinform the ignorant public. Reckless comments made by people need to be investigated and ascertained before publishing in order to enhance credibility of the media particularly Daily Graphic.
The office of the Shia National Imam urges ministry of the interior, national security, the judiciary, the media and all stake-holders to identify the ideological root of radicalism and terrorism, attach and exert more efforts to any attempt at forging and promoting closer intelligence and security ties at the national, regional and international level, to propose and discuss other possibilities before the country is grappled with crisis from these criminal gangs whose goal is the destruction of human civilization in the name of Qur`an and Tradition of Prophet Muhammad (s).